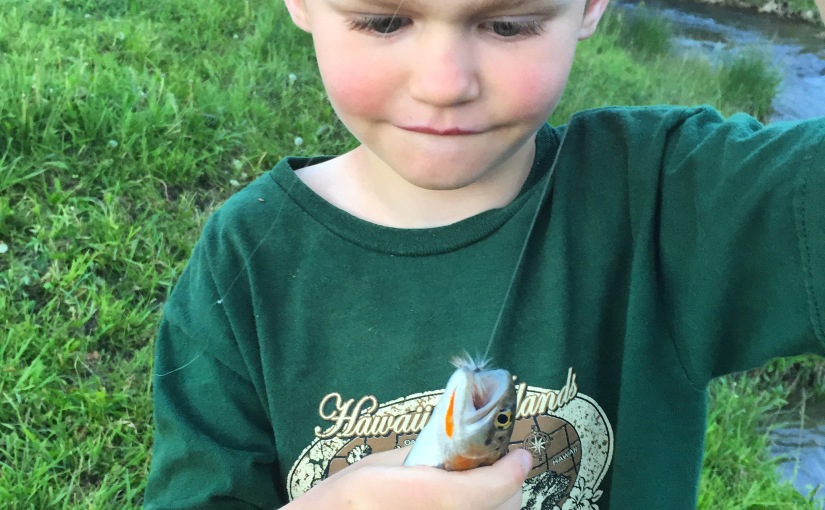 My wife and I named our son, Benjamin, after the great founding father, Benjamin Franklin.  We later came to find out that the name means “son of the right hand” or “son of the old age” in Hebrew.  Since he is the last of our six kids, I figure that both meanings are appropriate, especially since Ben inherited his old man’s love of the great outdoors and fishing.

Last Friday, I took off from work early and Ben, who is almost five, said, “Dad, let’s go fishing!”  I asked him a few times to make sure that he really wanted to go and he was resolute every time.  So I donned my shorts and wading sandals and Ben put on his wading shoes.  Of course, we stopped by the store to buy a few treats, Gatorade and Nut Rolls, before we headed to our destination.

Not far from home there is a tiny spring-fed creek loaded with Yellowstone Cutthroats that I dearly love.  While it has a proper name, I call it “Trickle Creek.”  I have found that when the runoff just starts to drop and the creek begins to clear, this creek really shines and you can catch a cutty in every likely spot.    I often fish it with little fly rods, but it’s perfect for tenkara as there really is no need for a reel.  The biggest fish is no bigger than 13 inches, but most are 8 to 10 inches. I figured this would be a great place for us to catch a few.

When we reached our destination, I extended the Tenkara USA, Rhodo rod that is adjustable to three different lengths, 8’10”, 9’9”, and 10’6”, which is perfect for the tight conditions of Trickle Creek.  Our fly for the night was a Renegade.   Ben and I started catching fish almost as soon as we reached the water.  Little Ben giggled with every fish and loved wading in the creek. He even didn’t mind brush bustin’ to get to some of the holes, although a few times I had to put him on my shoulders to avoid the stinging nettle and other scratchy weeds.

Our deal was that I would hook them and Ben would let them go.  Of course, he had to name every fish before he let them go.  Let’s see, there was Skippy, Flippy, Ringo, Chubby, and Roly, and so on and so forth.  After landing numerous fish, I decided to let Ben bring them in and it was fun to see him fighting a fish on a rod that is easily four times his height.   And he did just fine.  I even let him try to cast a few times, but we need to work on that. 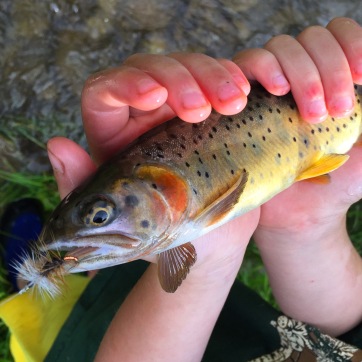 Beautiful Cutty on a Renegage. 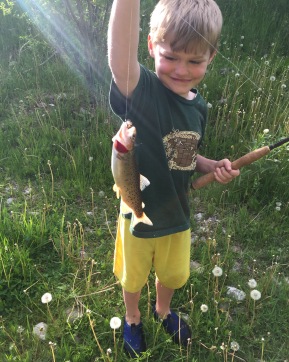 Ben’s enthusiasm and sheer joy was contagious.  I have fished this creek dozens of times over the years and I can honestly say this was the funnest, most memorable night I’ve spent on Trickle Creek.

As we drove home sharing the last of my grape Gatorade, I told Ben, “I had so much fun fishing with you buddy! I’ve got a new nickname for you.  You want to hear it?”

“You are now Benkara.  You are welcome to fish with me anytime, buddy.”

I’m looking forward to fishing with my little buddy into my golden years!