Remember, O LORD, thy tender mercies and thy loving-kindnesses; for they have been ever of old.

I’ve known my friend, Matt Tower, for over ten years. We go to the same church and have fished and hunted together quite a few times over the years and I always enjoy his company afield and on the stream. Matt was the first person to introduce me to tenkara fishing over three years ago. Since then, I have really developed a passion for it and even started this blog.

Last winter, while trying to push his son, Skyler’s stuck car out of the snow, Matt felt an excruciatingly painful pop in his heel. He later found out that he had torn his Achilles tendon in two and had to go through surgery to repair it. For six weeks, he could not put any weight on his ankle and had to get around with a scooter. Matt told me that it was one of the darkest times of his life. While I have not experienced that particular injury, I could relate somewhat because in 2007 I had surgery for a ruptured a disc in my back. For the six months before the surgery, I experienced debilitating pain, darkness and depression similar to what Matt described. In such situations, you wonder if you will ever be able to do the things that you love again and I’m sure that Matt spent much of his recovery time, like I did, praying to make it through this difficult trial.

Recently, Matt has been healing quite well and even went on a strenuous hike with the youth from our church. I figured if he can hike, he can fish. So, yesterday I invited him to come and fish my favorite stream, Trickle Creek. This was his first time fishing after the surgery. I picked Matt up and we drove to our destination.

At the creek, I tied on a Renegade and Matt used an unweighted rubber legged stonefly nymph. In my mind, I questioned his choice of fly and based upon past experience, believed that the Renegade would easily out-fish the nymph. I offered him a Renegade, but Matt declined. Oh well, to each his own.

The conditions were perfect as the creek was mostly clear from the runoff and the cutthroat could be easily seen in the holes, runs and lies. With bluebird skies and bright sun overhead, however, the fish were skittish and tougher to catch than usual. I seemed to spend more time than usual caught up in the trees and when I could get the fly on the water, the fish ignored it. In contrast, Matt started off having a good day as the eager cuts chased his stonefly nymph. I fished one particular promising hole and had a fish chase but reject my fly. I then invited Matt to give it a try and on one particular drift, a nice trout darted out from a rocky ledge and took the stonefly nymph. I videoed Matt catching the nice trout—the fish of the day. 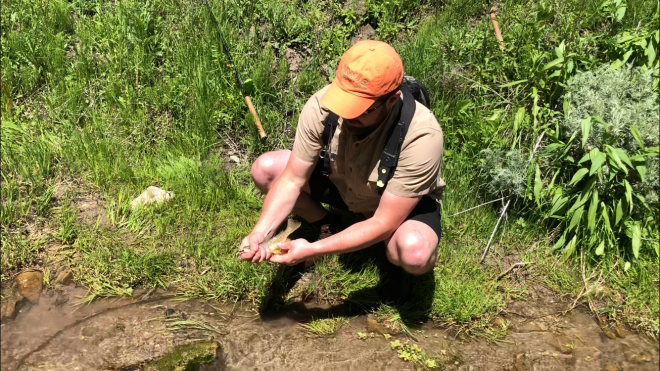 “How’s your ankle feeling?” I asked after Matt.

As we fished together, we saw some bigger, colored-up cutthroat that were trying to spawn, but they ignored our flies. In one particular shady hole, we could see two beautiful cutties and Matt cast the nymph up into the lie and it hung up on some snags at the bottom of the hole.

“You try for it with the dry fly,” Matt suggested.

I cast up to the head of the hole and we both watched the smaller of the two fish chase my fly down stream and engulf it. With the ruckus the smaller fish made, the bigger fish bolted and we had no more chance at him.

Matt and I explored some other water up the canyon and both caught a few more fish, but we had to soon pack it up as I had a church meeting to go to at 4:00 p.m.

When it was all said and done, I believe that Matt out-fished me with that crazy nymph. Some may call that skill or luck and such days a coincidence, but I call them tender mercies. In the Sermon on the Mount, Christ taught something that sums up my sentiments on this experience:

For every one that asketh receiveth; and he that seeketh findeth; and to him that knocketh it shall be opened.

Or what man is there of you, whom if his son ask bread, will he give him a stone?

Or if he ask a fish, will give him a serpent?

If ye then, being evil, know how to give good gifts unto your children, how much more shall your Father which is in heaven give good things to them that ask him?

In my experience, sometimes when you make it through a difficult trial, Heavenly Father gives you a special day to help you know that He cares. Those, my friends, are tender mercies from heaven (which in Japanese translates to tenkara).

Andrew M. Wayment (Andy) is an attorney by profession and an outdoorsman by passion. Andy is a partner with the law firm, Tolson & Wayment, PLLC in Idaho Falls Idaho where he helps clients in and out of Court. Andy’s family includes his beautiful wife Kristin, four daughters, two sons, and two bird dogs. In his free time, Andy enjoys writing and has published numerous articles on upland bird hunting and fly fishing in various magazines and the local newspaper. His first book is Heaven on Earth Stories of Fly Fishing, Fun & Faith. When Andy is not at work or with his family, you may find him at the river waving a fly rod or in the field toting a shotgun and following his bird dogs. View all posts by Andrew Wayment